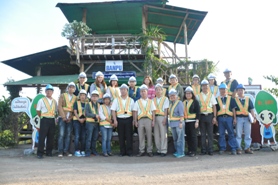 Banpu Public Company Limited has focused on ensuring a considered balance between sustainable business growth and community and environmental development. This has been one of Banpu’s key strategies underlying 30 years of consistent growth and development.

Throughout this time, Banpu has been consistent in doing its part to support community and environmental development in Thailand and other countries in the Asia- Pacific. The Company has continued running corporate social responsibility (CSR) projects both in and after operational process since its inception. Banpu has focused on preserving the environment at every stage of production while studying and monitoring any environmental impact throughout the life of the operation. At the same time, an “Environmental Master Plan” and an “Environmental Recovery Plan” are developed from the outset.

To prevent or lessen any possible environmental impact resulting from operations, Banpu has explored innovative new techniques as well as employing standard effective environmental management systems. It fully complies with all relevant environmental legislation, ensuring both prevention and monitoring measures are strictly adhered to.

Currently, Banpu is running the ‘Remedy of Acid Mine Drainage (AMD) in a Sustainable Way Project’ for Lamphun Mine, Banpu’s first coal mine located in Li District, Lamphun Province. Due to its tangible results, this project was recently recognized in the “Thailand Coal Awards 2013” organized by Department of Mineral Fuels of the Ministry of Energy and also in the “ASEAN Coal Awards 2013” held by the ASEAN Centre for Energy.

Mr. Chanin Vongkusolkit, Chief Executive Officer of Banpu, said that the ADM remedy project for Lamphun Mine is an in-process CSR activity, reflecting Banpu’s good practice in coal mining. It also demonstrates that the Company’s hard efforts and dedication in initiating and implementing new techniques to manage the acid mine drainage has achieved tangible success.

“We are proud of these awards which show that Banpu’s environmental practice has been recognized not only in Thailand, but also in the ASEAN countries. Moreover, the awards are only bestowed to corporations that show excellence in all aspects of good mining practice”, said Mr. Vongkusolkit.

He added that, as Banpu adheres to the business credo that ” an industry will be strong only when it is developed in tandem with social and environmental responsibility”, all its operations in Thailand, Laos, Indonesia, China, Australia and Mongolia will continue its commitment to constantly heighten operational efficiency while improving the quality of life of the surrounding communities . This principle underlies Banpu’s progress in the global energy industry as “The Asian Face of Energy”.