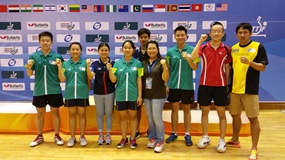 In its 7th year implementation, BTTC has been providing opportunities for youth to develop themselves through table tennis which aim at cultivating them to be good sportsmanship, show discipline, learn to adapt to new environments and enhance their skill constantly. It is not only to help these young people to grow up and be both “ethical” and “skillful” person, this also will groom these young talented to have social responsibility, which in the end will lead to sustainable development.